Having shared her story with the GCSG community at the 5th Annual GCSG European Knowledge Forum, Cathy took her fight against Parkinsons Disease to the “land of the rising sun”, by attending the 5th World Parkinsons Congress. Cathy is an Ambassador for the 4 day conference, which covered all aspects of Parkinson’s. Led by the world’s experts in clinical practice and research, representatives from Parkinson’s charities, PwP (People with Parkinsons) and all people touched by Parkinson’s, the conference presented new developments and treatments of Parkinson’s, current and future research, and promising drug treatments on the horizon through a variety of mediums.  One of those mediums was a “World Café” facilitated by Cathy and friends, it’s a similar concept to that of our workshops at GCSG where groups come together to share perspectives in response to a range of meaningful questions. There is however a difference with the output, as World Café’s often include an artist who records the discussion in a colourful and memorable manner.  The three World Café’s were attended by people from 62 countries and they even learned a little Japanese, Ikigai:  The Japanese Secret to a Long and Happy Life.  The key themes from the World Café’s were associated with the value of “meeting people like me”, information exchange, creating a support chain and the applying what we’ve learned.  All donations to the World Parkinsons Coalition would be greatly received. Please make a note of Cathy Molohan in your donation reference. 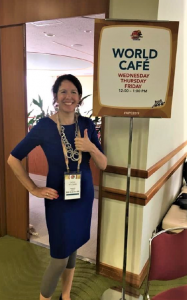 Join GCSG to gain full access to our educational resources and our member directory of more than 600 clinical supply colleagues!